Memes: Are They Right or Wrong For Your Business?

If you opened this article, there’s a good chance you fall into one of two categories: You either love and regularly post memes as part of your social media mix, or you have no idea what a meme is and you’re hoping to learn more. Whichever category you fall in, this article is for you.

Memes are popular in today’s online culture, and, as such, many brands have started using them in their social media and email campaigns. But, should they? Memes may be popular among millennials and Gen Z-ers, but that doesn’t necessarily mean they’re right for your business. Let’s dive into what memes are, how they add value to the social media landscape, and how to determine if adding them to your marketing mix is right for your business.

What Is A Meme?

A meme is a funny image, video, or phrase that is copied, and sometimes modified, and then spread rapidly by internet users across popular social media platforms like Twitter, Reddit, or Instagram. Most often, a meme is a still image or a GIF captured from a popular movie or TV show, and internet users add funny commentary to tell a new version of its story.

Memes give internet users and brands the opportunity to join the greater cultural conversation taking place online. The most widely spread memes become like a secret language among longstanding internet users, and new ones crop up every second of every day. 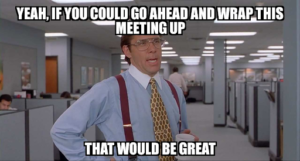 Ruffles Gets It Right

Here’s an example. The first meme, snatched from the popular kids’ TV show Arthur, was popular for some time, adding perfect commentary to nearly any bothersome situation.

Ruffles chips used the meme in a simple but effective way, tweeting the image with supporting text that read: “When your roommate eats all the Ruffles.” #Relatable. 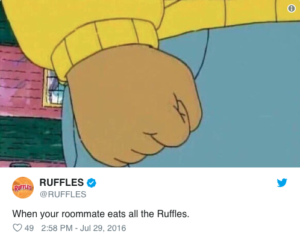 Will Memes Boost Your Brand?

So, what about you? Can you see the same success as Ruffles by using memes to support your social media content? Before you jump on the meme train, ask yourself these questions:

Who is our target audience?

This is arguably the most important question to ask before adding memes to your social media lineup. Memes are most popular among the millennial and Gen Z audiences, as well as with those who are highly engaged in pop culture and current events. If your target audience doesn’t fit this description, your meme-ing efforts will likely be lost.

What is our goal?

Before you throw the funniest or most popular memes up on social, consider your end goal. Are you sharing a meme because it cleverly helps tell your brand’s story? Or, are you sharing a meme just because, in the hopes that it’ll catch the attention of a young internet user?

As long as memes support your strategy, they’re fair game. And if you’re set on using them, figure out a way to intelligently sprinkle them in among your existing content, so they more seamlessly become part of your regular social media mix.

Some memes go down in internet history. Others die out as quickly as they gained popularity. Depending on your organization, there’s a chance the social media content you want to publish has to first undergo an approval system. Proofing for spelling and grammar mistakes is only step one; gaining the approval of the leadership or legal team can be an entirely different battle.

Just like the internet, meme marketing is here to stay. In order to make it work for your brand, you need a deep understanding of your target audience, your goals, and the lifetime value meme content can create. Once you have a clear and concise answer to each of the questions listed above, you’ll know if the world of memes is yours for the taking.

In the meme time, check out additional ways to create content that connects with your audience. 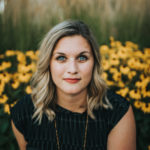 Erika is passionate about content creation and brand growth. As a copywriter and community manager, and content strategist, she uses her talent for writing to elevate brands. In her free time, she enjoys exploring the Minneapolis food scene, practicing yoga, and sipping on coffee.